This was a minor stunt that appeared in the second series of Dirty Sanchez and only involved two of the Sanchez members.

Dainton was being taught a brief summary of what to do before the tattoo. Pancho was going to get a tattoo on his ass saying "SHORT ARSE" Pancho wanted the stunt to get over and done with due to his distrust with his friends. Pancho was terrified of what Dainton was doing to make matters worst Dainton turned the power of the gun up a notch which hurt Pancho some more. Pancho was shaking in pain luckily Dainton only had to do one last letter. Dainton managed to finish to Pancho's relief.

Pancho's arse was scarred red but the tattoo was successful as Dainton did keep within the lines. Pancho suffered a lot of pain from the tattoo but ended up liking it at the end. 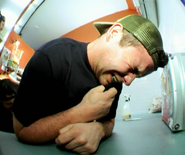 Retrieved from "https://dirty-sanchez.fandom.com/wiki/Amateur_tattoo?oldid=2455"
Community content is available under CC-BY-SA unless otherwise noted.