This was a challenge as well as a stunt from the first series of Dirty Sanchez and involved all the Sanchez boys. It is the first arm wrestling style stunt.

There was a set of two rounds and a final. One Sanchez member would win an arm wrestle with another which then results in a final bout with the two winners from the two rounds. On one side of the table, there are pins while the other has barb wire. In the final there are candles.

"Round one of Arm wrestle... sting...ring"
— Dan Joyce starting the first round

The first round saw Pritchard against Dainton . Straight away Dainton had the upper hand forcing Pritchard's arm to be smothered by the barb wire on his side of the table. Dainton wins.

The second round saw Pancho against Dan. It seemed at first Pancho was more powerful as he continuously attempted to press Dan's hand against the barb wire, however that was just Dan playing with him. Dan then took full control and shoved Pancho's hand against the bed of pins. Dan Joyce wins.

The final saw both Dan and Dainton against each other. Like before Dainton finish the round very quickly by slamming Dan's hand against the candles. Dainton wins.

Pritchard suffered some puncher wounds by the barb wire. Pancho had pins stuck in his hand. Dan had been burnt by wax and Dainton suffered no pain due to the fact he didn't get defeated. 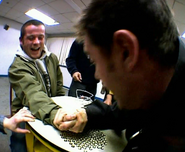 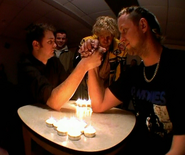 Add a photo to this gallery
Retrieved from "https://dirty-sanchez.fandom.com/wiki/Arm_wrestle_sting_ring?oldid=2439"
Community content is available under CC-BY-SA unless otherwise noted.