This was a stunt from the second series of Dirty Sanchez and is a part of the Pritchard vs Dainton rivalry. This takes place after the Quick grip stunt.

"It was a fifty, fifty chance, heads or tails and he always lost"
— Dan Joyce

Dainton and Pritchard were at it again. This time they went off to see who is better at arm wrestling with some clamps. It was also a heads or tails game, Pritchard chose tails while Dainton chose heads. Dan Joyce would flip the coin and whoever won got to tighten the clamp. Dainton, luckily, managed to win every time, Pritchard didn't. On the last squeeze, Pritchard gambled double or quits, in other words have two squeezes if he wins. Pritchard didn't win and had his fingers crushed.

Dainton purposely tightened the clamp as hard as he could on Pritchard's fingers. Pritchard screamed at the top of his lungs due to the pain he suffered in fact he even started to cry. His fingers were crushed and had gone red with marks from the clamp. 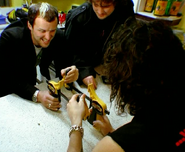 Add a photo to this gallery
Retrieved from "https://dirty-sanchez.fandom.com/wiki/Arm_wrestling?oldid=2467"
Community content is available under CC-BY-SA unless otherwise noted.