This was a stunt that appeared in both series one and two of Dirty Sanchez and involves all the Sanchez boys.

The first time the stunt is featured is in Episode one where only Dainton endures the pain. Dainton had two elastic bands around his head while Dan Joyce stretched the bands. Dan lets go of the band hitting Dainton on the forehead, Dan did it a second attempt when he stretched it further which hurt Dainton even more than before.

In a later episode, Pancho was forced to endure the elastic band. Dainton had hold of the band itself and stretched it to the limits before letting go and hitting Pancho.

In series two Dan Joyce was the victim chosen for this stunt. Unlike before there was a card strapped to the band to deal extra pain. Though the card wasn't painful, a metal cap afterwards was. The metal cap scared Dan into covering his eyes only for Dainton to move the hands out of the way before letting go of the metal cap, which was even more painful.

As a way to advertise a live show the Sanchez boys decided to use the Band head stunts. This time Pritchard was used to take the band hits. He was used as advertisements and unlike the other boys he was willing to take the hit.

Every time the stunt was featured, the boys suffered pain from the head and a red mark was left on their heads. 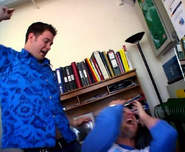 Add a photo to this gallery
Retrieved from "https://dirty-sanchez.fandom.com/wiki/Band_head?oldid=3207"
Community content is available under CC-BY-SA unless otherwise noted.