"Ning do your thing! "
— The catchphrase for this family friendly game.

Bangkok Roulette is a game invented by the Sanchez boys in Thailand during the Lust portion of the Dirty Sanchez movie. The rules of the game are very simple: all four boys get their trousers and pants off, and with the assistance of a lady named Ning, they have to guess who Ning will be wanking off underneath the table, whoever gets it wrong has to down fried bugs.

Ning does her thing Edit

Standing on a random roof in Thailand the boys decide to come up with a brand new game called Bangkok Roulette, the rules are simple, Ning will go under the table and wank one of the four boys off, whoever guesses wrong will have to down some fried bugs.

After Pritchard introduces Ning to the group she quickly gets under the table and the games soon begin, with some classical music comically put into the scene as the boys tried to keep a straight face, from time to time Pritchard tries to confuse Dainton by pretending to be wanked off. Time soon ran out and they now had to guess who was being wanked off, Pritchard started off by asking Dainton, who said he couldn't answer as he was the one being wanked off, Pancho guessing it might have been him, Dainton quickly asked if Ning was going to stop in case he got hard, Ning having continued the handjob after the time ran out.

As Pritchard had asked Dainton he automatically had to be the first to down the bug, but when he tried the first time he panicked and confused the others, making them laugh as he explained himself 'That proper freaked me out. A bit of his leg was in my mouth!' He soon started being a big girl about it as he couldn't swallow the bug, saying that he hated bugs, Dainton hitting back with saying he doesn't like ladyboys and that Pritchard eating bugs was payback.

Eventually Pritchard was able to do it and the game continued, a montage is shown with each of the boys reactions to downing the bugs: Pritchard was still freaking out and being a big girl, Pancho was gagging and on the verge of being sick while Dan, in typical Dan fashion puked in his whisky glass and downed the whisky, the bug and the puke.

Dainton: Boys the bugs aren't even that bad, I could stay up here drinking whisky and eating bugs all night. "

— Dainton surprises the boys, Dan in particular when he eats a bug as if it were normal.

When it came to Dainton's turn he just popped the bug in his mouth and acted like nothing had happened, making the boys, Dan in particular surprised and annoyed by his lack of shock, Dainton saying that the bugs weren't as bad as the other three were making them out to be, and if he had a choice he would stay on the rooftop all night and just eat bugs and drink whisky, saying they were like pork scratchings. Deciding that the bugs aren't enough Dan suggests upping the ante with something worse than the bugs, Pancho soon suggests something 10x worse than the bugs.... 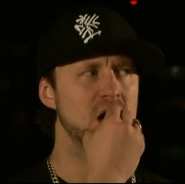 Add a photo to this gallery
Retrieved from "https://dirty-sanchez.fandom.com/wiki/Bangkok_Roulette?oldid=3499"
Community content is available under CC-BY-SA unless otherwise noted.