This was a stunt that involved all the Sanchez boys racing each other by jumping over hurdles covered with Barbed wire.

Before the race, Jamacian Olympic runner, Linford Christie told the boys what to do. He instructed them to "Skim it" but knew that the barbed wire would get in the way.

The race got underway with all the Sanchez boys knelt and ready. Linford gave them a ready set go and the boys went for it. Pritchard and Dainton had no problem jumping over the hurdles however Joyce had slowed down to climb over it and Pancho tripped over the first hurdle and fell over. As the race pursues Dainton fell behind Pritchard by knocking into one of the hurdles while Pancho got up and jumped over the next few hurdles, Joyce was still just getting over his first few hurdles. Eventually Pritchard and Dainton were at the last leg and raced to the finishing line while Pancho decided to cheat by going underneath them.

1st:Pritchard 2nd:Dainton 3rd:Pancho 4th:Joyce Only Pancho and Joyce suffered any cuts as they were the only ones to knock into a barb wire hurdle, Dainton and Pritchard suffered no cuts. 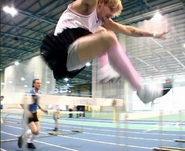 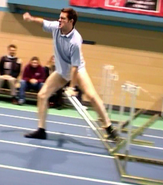 Add a photo to this gallery
Retrieved from "https://dirty-sanchez.fandom.com/wiki/Barb_wire_hurdles?oldid=2416"
Community content is available under CC-BY-SA unless otherwise noted.