"Why on Earth would you want to whip your back with barbed wire?"
— Dan Joyce to Pancho

This was a stunt from the first series of Dirty Sanchez and involves three of the Sanchez boys but only one of them were whipped.

Dainton foolishly had himself in between two wooden pillars where Pritchard had a skipping rope with barb wire wrapped around it. Pritchard gave a huge whack against Dainton's back which caused Dainton to give up after one hit. However, the boys attempted a second turn where Dan and Pritchard held on both ends of the whip and span it round like a skipping rope. Dainton attempted to jump the deadly skipping rope but ended up getting caught in between the legs and then a second time having the rope twist round his body.

Not only was there a mark from the whipping itself but also puncher wounds from the metal spines from the barb wire. It was extremely painful for Dainton. 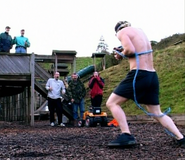 Add a photo to this gallery
Retrieved from "https://dirty-sanchez.fandom.com/wiki/Barbed_wire_whip?oldid=2430"
Community content is available under CC-BY-SA unless otherwise noted.