This was a work related challenge by the Royal Marines for three of the Sanchez boys. It was featured in the second series of Dirty Sanchez.

How to kill off your cast[edit | edit source]

For reasons unknown Dan Joyce didn't want to take part in the stunt, whether being too dangerous or medical issue or even a fear of drowning. The Sanchez boys were told the simple task of jumping off a diving board and swimming to the side however this simple task had the added difficulty of all the equipment being carried while jumping, this includes water bottles, a gun, ammo etc.

None of the Sanchez boys were looking forward to the stunt and unfortunately for Pritchard he had to go first. Pritchard went to the top of the the diving board and soon as the corporeal shout "Go!" he dropped into the pool. It took over four seconds for Pritchard to resurface but took a further nineteen seconds for him to swim a metre to the side. Pritchard survived and completed the challenge but this first go left the other Sanchez boys shaken in absolute fear.

Dainton went next and similarly to Pritchard jumped in the pool. It took six seconds for Dainton to resurface and another seven seconds for him to swim to the side.

Pancho was next. Already there was a flaw, Pancho was shorter and not as strong as the other two and seeing as the other two had difficulty resurfacing and swimming to the side, Pancho was well and truly screwed. Pancho jumped off the diving board and sank to the bottom immediately, and with no signs of moving to the surface. After sixteen seconds passed someone had to fish Pancho out however they were unable to do so, this causes the lads to genuinely get concerned for Pancho, Dainton more so judging from his expressions. Another twelve seconds a second person jumped in and had to save Pancho. Pancho finally resurfaced and was brought out of the pool, where he lay on the ground seriously gasping for air and soon had to be carried to the exit. He was the only one that didn't complete the swimming test aside from Dan who didn't take part, Pancho obviously affected from having stayed under water for too long.

The boys were left shell shocked from their experiences and vowed to never do it again. Pancho had almost drowned in the test, and even said himself he almost drowned after having been dragged out of the pool. 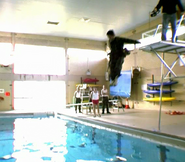 Retrieved from "https://dirty-sanchez.fandom.com/wiki/Battle_swimming_test?oldid=3606"
Community content is available under CC-BY-SA unless otherwise noted.