This was a stunt/gag from the first series of Dirty Sanchez and only features one Sanchez boy.

I like big butts and I cannot lie Edit

Dan Joyce wore a swimsuit equipped with gloves strapped on with gaffer tape. The only exit hole was the head everything else was covered completely in order for the stunt to work. A hose was put down through the collar of the suit where it filled the swim suit with water. The suit began getting heavy to the point Dan was forced to sit down. Dan sat in a chair but accidentally broke the chair due to the weight of his "blubber suit" Dan was eventually pulled back by the other Sanchez boys who then laughed at his "saggy ass" Dan fell over again soon after.

There was no pain involved what so ever but Dan did think it was cold. 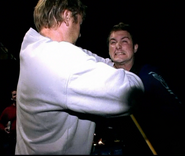 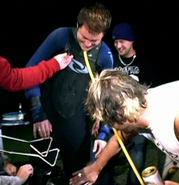 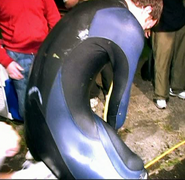 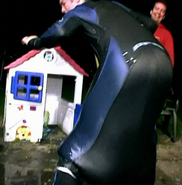 Add a photo to this gallery
Retrieved from "https://dirty-sanchez.fandom.com/wiki/Blubber_man?oldid=2426"
Community content is available under CC-BY-SA unless otherwise noted.