"I'm never gonna go on the piss in Newport again! Fucking assholes! You know this shit is fucking Newport!"
— Pritchard in a very angry mood

This was a deleted scene from the Series two DVD. It was fight that occur off screen and the filmed scene itself is a direct aftermath.

Off screen, Pritchard had gotten drunk and peed on Dainton. This act caused a fight between the two but soon Dainton called for some protection from some bouncers. The bouncers chucked Pritchard out of the club they were in. Dainton followed the two bouncers to yell at Pritchard for what he did.

Obviously Pritchard was unhappy with the incident and protested he should be let in again. Pritchard made rude hand gestures in front of a glass window and door which alerted the bouncers causing Pritchard to run away. 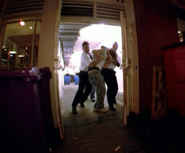 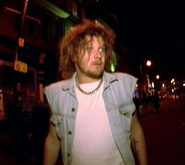 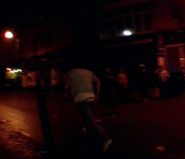 Add a photo to this gallery
Retrieved from "https://dirty-sanchez.fandom.com/wiki/Bouncer?oldid=2209"
Community content is available under CC-BY-SA unless otherwise noted.