"I want a fucking proper cowboy to brand me"
— Pritchard

This was a stunt from the second series of Dirty Sanchez. It has made two appearances the stunt but one was only featured on DVD as a bonus feature.

Pritchard wanted to be branded. A "cowboy" said that it would "fucking hurt" but it fell on deaf ears. Pritchard was going to get branded with a "DS" which stands for Dirty Sanchez, if you're not a complete moron.

Pritcard pulled down his trousers and shown off his leg to the brander. Instantly the cowboy branded Pritchard's leg. Pritchard moved out the way before it could be proberly pressed. A second attempt came soon after and Pritchard decided to stay still and did so successfully even if it hurt a lot. He later wanted one on his head, but it never happened.

A second branding involved a producer, in order to get him apart of the Sanchez crew. He had the brand on his arm.

Most obviously it hurt but as the cowboy said it only hurts for two seconds before the muscle is burnt away. The most obvious aftermath was the brand itself left a burnt mark on the body. 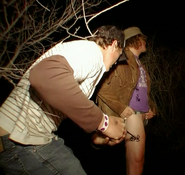 Retrieved from "https://dirty-sanchez.fandom.com/wiki/Brand?oldid=3560"
Community content is available under CC-BY-SA unless otherwise noted.