For this stunt, Pancho was selected for having a fear of height. Pancho was given a bike helmet and was wrapped up in a large bubble wrapping by Dainton and Pritchard, complaining that he would "snap his neck" going down the hill. Eventually, Pancho was completely wrapped up and was taken to the spot where they would push him down. Pancho was laid on his side and with help from Pritchard, pushed down the hill. Pancho rolled down the hill at a mild speed at first but quickly gathered more speed as he rolled, with Pritchard running alongside him. However, Pancho started rolling off grid and started to roll over the side and onto the grass to his right. After colliding with the side, Pancho was corrected by Dainton and Pritchard and he was pushed him down, he rolled much quicker this time. As he got closer to the end, Pancho, once again rolled off to the side where some of the production crew helped stop him. This time Pancho wanted to be free.

"Fuck me, I feel claustrophobic as Hell man!"
— Pancho

Pancho suffered no pain nor did he seem to have hated the stunt. He did seem to mind being wrapped up so heavily and the height but over all seemed to enjoy it. 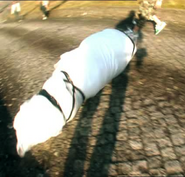 Add a photo to this gallery
Retrieved from "https://dirty-sanchez.fandom.com/wiki/Bubble_wrap_roll?oldid=3885"
Community content is available under CC-BY-SA unless otherwise noted.