"Tonight we discover Pritchard's desire to be a stuntman,Dan gets suited and booted,Pancho finds his true vocation and Dainton fails to impress the boss"
— opening narration

This is the fifth episode of series one of Dirty Sanchez and it focus's on the jobs that the Sanchez boy work in and how well they work, while also showing off what they desired to become when they were younger.

"I wanted to be a history teacher believe it or not...boy did that go fucking wrong"
— Pancho reflects on his younger life.

Pancho wanted to be a history teacher but life didn't go the way he planned. He was made redundant in January of 2002 due to his laziness.

Work colleagues reveal that he did nothing but go out for fag breaks and become aggressive towards the staff. He often blames Pritchard for his constant lateness.

" Matthew always wanted to be a stuntman, that was his aim in life when he was younger"
— Pritchard's mother

From a young age Pritchard wanted to be a stuntman and even did some stunts with his friends at school.

Pritchard use to be a window cleaner when he met his girlfriend at the time. Matthew is meant to do a lot of things in work at a skateboard company but he mainly the best at being a motivater even if this mean messing around. Pritchard has pride in his job but is very lazy.

Before he was a sale representative he was a team leader. Dan Joyce, like Pancho, was made redundant due to poor working skills as a Sales representative for ITV. Dan Joyce was the only person in the whole company to wear a suit and he was criticized for doing little work.

Dainton started to learn how to do carpentry from a younger age because he wanted to make skateboard ramps. He didn't pass his exams but still got a job in D.I.Y. He wanted to do more instead of carpentry but still does it on a smaller basis.

His later job was managing the skateboard shop, however he is quite lazy and doesn't do much. 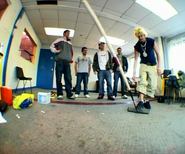 Retrieved from "https://dirty-sanchez.fandom.com/wiki/Careers?oldid=3238"
Community content is available under CC-BY-SA unless otherwise noted.