"Au revoir"
— Pritchard before the slide

This was a minor stunt from the first series of Dirty Sanchez. It only featured one Sanchez member.

Going for a slide[edit | edit source]

Presumably outside a construction site Pritchard decided to strip naked and slide down a cement slope into a pond. Pritchard did so quickly.

Pritchard has graze marks on his ass. 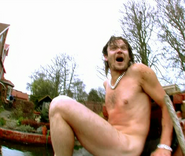 Retrieved from "https://dirty-sanchez.fandom.com/wiki/Cement_slide?oldid=2475"
Community content is available under CC-BY-SA unless otherwise noted.