"We've been playing this game, this wheel of fortune, just to make the long journey a little more interesting"
— Jarno Lappala to Dainton

This was a stunt performed in the 2014 Gumball 3000 rally. It was published by The Dudeson's official YouTube account and involves one of the Sanchez boys.

While driving Jarppi explained to Dainton what was to endure while on their Gumball trip. There was a wheel of fortune with the faces of The Dudesons team on the board to see who would eat a chilli with Dainton. Jarppi spun the wheel and it landed on Jukka first. Dainton and Jukka chose a chilli, Dainton had a large chilli while Jukka had a small one. The smaller the chilli, the spicier and so Jukka suffered a very hot chilli which almost made him puke. At this point the boys had gotten rid of the wheel of fortune and just let poor Jukka suffer the consequence. Jukka had almost no luck in the challenge having to eat very spicy chillis while Dainton had mild ones. However Dainton soon had a very spicy chilli and started suffering. Dainton was almost sick and after just one gave up.

Jukka and Dainton had a hard time breathing and would constantly cough and in some cases almost start being sick. 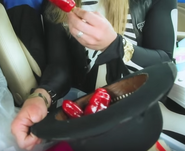 Add a photo to this gallery
Retrieved from "https://dirty-sanchez.fandom.com/wiki/Chilli_challenge?oldid=1841"
Community content is available under CC-BY-SA unless otherwise noted.