This was a stunt from the second series of Dirty Sanchez and it involved Dan Joyce being hit by a round comb on the head.

How to treat your workers Edit

It is unknown which day of the week this stunt was done it is presumed to be on the first day or the last day. Their boss for the episode had a round comb in hand and was preparing to hit Joyce on the forehead. Dan Joyce was sat in one of the chairs at the hairdressers they were in and had his head in the sink. Dan braced for impact and in a very quick hit it was over. Some brush spines broke and flew out upon impact while also having impaled some spines into Dan's forehead.

Similar to the first Pinhead, some spines had gotten stuck in Dan's head. Dan was also bleeding a lot from the forehead. 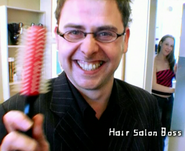 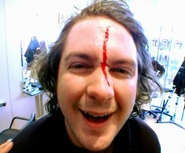 Add a photo to this gallery
Retrieved from "https://dirty-sanchez.fandom.com/wiki/Comb_over?oldid=2448"
Community content is available under CC-BY-SA unless otherwise noted.