"It's all about concentration, yeah, forget about the pain"
— The boss

This was a stunt in the second series of Dirty Sanchez. It was a test of concentration while also suffering a lot of pain in the process.

The task was to keep still while being punched, whipped and jumped on. All the Sanchez boys layed next to one another on the ground while their boss "teaches" them about concentration. Pritchard was the first to suffer, the boss punched him in the stomach. Dainton was soon next to get hit, this time hit with a ruler on his feet. Pancho, like Pritchard, was punched in the stomach while Dan was whipped with a ruler on his feet.

The next round of hits started with Dainton getting punched in the stomach, Pancho gets hit with a ruler across the stomach, the boss jumps onto Pritchard and punches Dan.

Pritchard was shaking from the pain he endured, Pancho was in quite a bit of pain while Dan and Dainton were never seen in a lot of pain but they probably were. 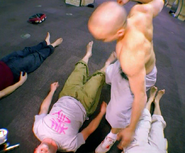 Add a photo to this gallery
Retrieved from "https://dirty-sanchez.fandom.com/wiki/Concentration_test?oldid=2468"
Community content is available under CC-BY-SA unless otherwise noted.