"You just spoilt a perfectly good interview"
— Pancho after being splattered

This was a prank pulled off by Pritchard against Pancho. It was featured in the first series of Dirty Sanchez.

While being interviewed, Pritchard had gotten ready a cream custard pie and crept up to Pancho who was distracted by the camera. Pritchard then proceeded to splatter Pancho with the pie. Pancho was angry because it ruined his "perfectly good" interview. Pritchard added more cream by using a can full of cream and sprayed it all over Pancho which angered him more. 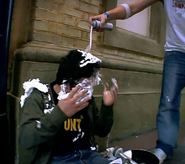 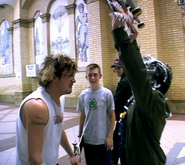 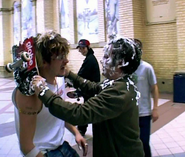 Add a photo to this gallery
Retrieved from "https://dirty-sanchez.fandom.com/wiki/Custard_pie?oldid=2434"
Community content is available under CC-BY-SA unless otherwise noted.