After the disaster of being in Germany the boys head off to a country that'll make them happy once more. Here they learn about what it takes to be a man.

"If you're a man, a red blooded man, then the Czech Republic is the place for you"
— Dainton

Dainton and the other boys were looking forward to being at the Czech Republic as it was a place for absolute fun for a multitude of reasons for example guns, women and parties. They declare the country the place for all men.

Without fail, Pritchard and Dainton were at each other's throats again, attacking and pranking one another. The boys go to a martial artist and a shooting range to test their "manliness" Dainton believes that he wouldn't last that long. Pritchard reveals that he is not a violent person but recently Dainton has gotten on his nerves and plots to get him at some point. Pritchard also reveals that the bus is a danger zone where the boys will attack one another when given the chance, the best advice he could give is not to fall asleep. Pancho is the one who needs the most self defense.

Now you're a man! Edit

To put their manliness to the test Pritchard had to get shot and Dainton had to observe Pritchard perform a strip tease. Pancho on the other hand had to get married to Pritchard while Dan became a vicar.

Before the wedding, the boys were treated to Czech version of a stag night. Pritchard thinks Dainton is a "typical bloke" due to his homophobia and his constant acting like "the man around the place " sort of guy. Meanwhile Pancho and Pritchard get married...

"Of all the gigs, apart from the Death metal gig, this is the one that I'm looking forward in doing."
— Dainton

The boys were looking forward to the live show as Welsh people were the majority of the crowd as well as the fact that they enjoyed their stay at the Czech Republic. Pancho after the live show demands that the Sanchez boys rebel against the tour bus and Johnny B and head off to the next destination on their own.

Meanwhile Dainton and Dan reveal to the other boys that they are actually married to each other... 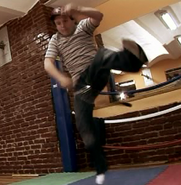 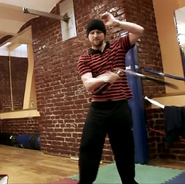 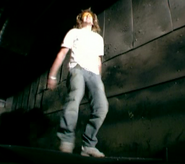 Add a photo to this gallery
Retrieved from "https://dirty-sanchez.fandom.com/wiki/Czech_Republic?oldid=2872"
Community content is available under CC-BY-SA unless otherwise noted.