"The one night that I fell asleep. The D lock was put round my neck."
— Pancho describing what happened to him.

This was a Pancho wake up prank that involved putting a "D-Lock" around the neck of Pancho, triggering him to be unable to work as well as he did the other days.

Pritchard then suggested swallowing the key so Pancho would have to wait till they take a shit to get it back. Joyce volunteered and ate the key with the help of some beer. The boys decide to wake Pancho up by jabbing him with a pen and eventually a cigarette. Pancho awakes with anger flipping a table and only gets even more angry by the D-lock around the neck. He chases after Pritchard and Dainton for the key but finds out that Dan had eaten it.

"It's still on you! Hahahaha"
— Joyce upon witnessing Pancho in the shower

Pancho never got the lock off of him until the end of the week after filming. The entire episode Pancho has the lock around his neck ether hidden by his hoodie or he is seen trying to get the lock off with some sort of building equipment. Pancho is eventually freed when Joyce does go to the toilet but unfortunately for Pancho he was forced to put his hand in to grab the key.

A second attempt with the the D-lock appeared in the same series in the episode Firefighters. This time the boys has put two D-locks on and locked in some coat hangers to add insult to injury. Dan Joyce and a Scottish camera woman ate the keys this time however the lady refused to let Pancho dig around in her shit in the toilet for the key, and as Dan had swallowed one key and the Scottish woman swallowed the other Pancho was fucked, however Pritchard had gotten spare keys and planned to hide them just to mess with and piss Pancho off even more.

After Pancho woke up he once again saw the D-lock and the other things attached to it he was not happy and went to confront the boys about it, however as he confronted them he started to smile and nearly laugh, as he shouts that he isn't supposed to be smiling or laughing as he starts bashing the door to get everyone's attention. This time, instead of digging around in shit Pancho decided to go and get the lock cut off professionally. After being told to keep still as the locksmith cut away, and luckily for Pancho it worked and he was free once again,however Pritchard then revealed that he had spare keys the whole time which only made Pancho more pissed off and attacked Pritchard.

This gallery is locked[edit | edit source]

Dainton with the lock

The lock being put on

They awake the beast 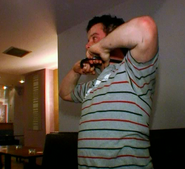 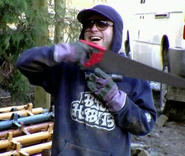 Trying to saw the lock off

The second attempt with the D-Lock

Second attempt at getting rid of the lock
Add a photo to this gallery
Retrieved from "https://dirty-sanchez.fandom.com/wiki/D-Lock?oldid=3784"
Community content is available under CC-BY-SA unless otherwise noted.