"That bitch got smoked"
— Dainton

This was a stunt that involved only two Sanchez boys using a flammable spray and a lighter to burn off pubic hair. It only appeared in series one.

First Pancho had the turn of being burnt. Pancho wanted his "bum fluff" to be burnt off and Dainton was willing to apply. Dainton used the spray first then he ignited the lighter and set fire to his arse and back. The pubic hairs were singed and Pancho was quick to back away.

Dainton decided to get his own pubic hair by burning the hair above his genitalia. He did the same as before but unlike last time his pubic hair had caught fire, he was quick to put it out and luckily didn't suffer as much pain as Pancho.

"Woke up this morning thinking I had a wet dream last night and err to my horror I checked my ass and all by blisters had burst."
— Pancho

Dainton didn't suffer but Pancho did. For days Pancho had blisters from the burns and some had popped to make matters worst he was hit in the ass a few times by a football during the stunt Goal. 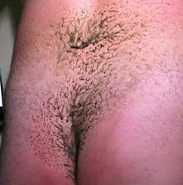 Add a photo to this gallery
Retrieved from "https://dirty-sanchez.fandom.com/wiki/Deep_fried_spray?oldid=2424"
Community content is available under CC-BY-SA unless otherwise noted.