"Pancho falls asleep end of story. Let's fucking do a move on"
— Pritchard

This is a Pancho wake up prank from series three of Dirty Sanchez. It features Pritchard and a cameraman as the pranksters this time.

Pritchard had found a passed out Pancho. After being in a pub and performing a live show, Pancho had become drunk and soon went to a van, falling asleep.

"Come on we've got to go! We got to get out of here!"
— Cameraman to Pancho

A cameraman started shaking Pancho and telling him to "go!" Pancho awoke with a fright and got out of the van without realizing the stuff that has happened to him. Pritchard then tells Pancho to get drinking. Pritchard shakes hands with Pancho...

By shaking hands with Pritchard, Pancho noticed his hand was covered in dirt. Pancho looked at himself and then reacted in anger. Pancho grabbed Pritchard's hair and then slapped him in the face. 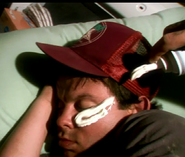 Add a photo to this gallery
Retrieved from "https://dirty-sanchez.fandom.com/wiki/Dog_mess?oldid=2518"
Community content is available under CC-BY-SA unless otherwise noted.