"Alright enough of the horse shit, this is what's going down. We got one drone, one fishing hook, one ear."
— Dainton

This is a stunt performed by Dainton in 2016. It was for his web show "Goon TV" and involved only Dainton from the original Sanchez crew.

For some time, Dainton had hinted at a possible Fishing hook stunt involving a drone. On Instagram he had shown "teasers" for this particular stunt until 23rd May when the stunt was released.

Dainton along side friend and aerial photographer Warren Pitt decided it would be a clever idea to use a drone to tear a fishing hook from his ear. Firstly, Dainton got the fishing hook and hooked it onto the end of his ear. The fishing hook was tied to the drone. Dainton then sat down on a tree stump while Warren started up the drone. The drone set off flying over Dainton and getting higher with each second, tugging the fishing hook. The drone was so strong that is pulled Dainton away from the stump and sometimes dragged him around. Eventually Warren crashes the drone, to Dainton's relief.

The drone had broken apart which upset Warren. Dainton was bleeding quite significantly from the drone fishing. At the end of the video Dainton hints that there maybe more stunts on the way... 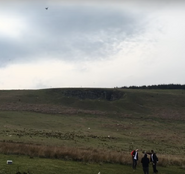 Add a photo to this gallery
Retrieved from "https://dirty-sanchez.fandom.com/wiki/Drone_Fishing?oldid=3184"
Community content is available under CC-BY-SA unless otherwise noted.