"Best qualities, urm...Gotta think about that one"
— Pritchard

The first Sanchez we find out about is Matthew Pritchard. We find out from Lee Dainton and himself that he has "never been right" Pancho thinks of him being an absolute psycho while Joyce calls him the "best bloke in the world"

Dainton and Pritchard met eachother at a skatepark when they were young and ever since have been the best of friends and shared some hobbies. However Dainton has shown concern with how extreme Pritchard can be in his stunts.

Pritchard describes Dainton as a fucking screwloose" and describes how funny he has gotten over the last four years. Pancho thinks Dainton has voices in his head.

Dainton reveals his OCD stating that he always feels like something is going to happen to him. He also reveals that his father use to take LSD and blames that or Beetlejuice on his crazy behavior.

" If I were to describe myself in three words I would say short,fat and stupid."
— Pancho

Pritchard reveals that the Sanchez boys pick on Pancho because he is small. Dainton doesn't realize they pick on Pancho unless he's asleep.They also refer to Pancho's alcoholism and how aggressive he becomes.

His parents say that Pancho is a wonderful sleeper. However his father states that sleeping was his biggest fault. His mother on the other hand says that he was a "wonderful little boy" and she doesn't know what went wrong. Pancho does admit that his parents are shocked with how he turned out.

Pancho reveals that a friend of his got him into Skateboarding hence meeting a "bunch of freaks" resulting in the life he has now.

"Why should you let people judge what you do."
— Dan Joyce

Dan Joyce is described as weird overall but Joyce doesn't care. He shows a lack of care when it comes to self image. The others see him as the funny man 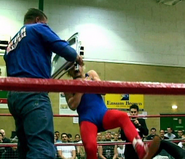 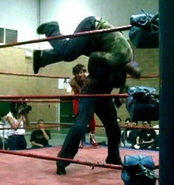 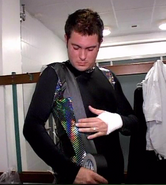 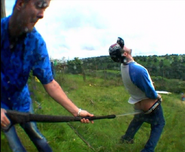 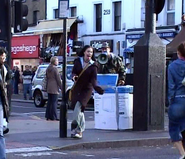 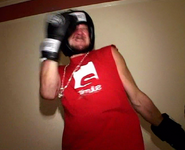 Retrieved from "https://dirty-sanchez.fandom.com/wiki/Episode_one?oldid=3199"
Community content is available under CC-BY-SA unless otherwise noted.