"Everybody on the two coaches are cracking up, Everybody, the crew, the drivers, the tour manager. "
— Dainton describes the chaos

This was a challenge/drunk gag that involved non of the Sanchez boys, instead it has a camera man and Johnny B.

It appears that Johnny B had some drinks and so did a cameraman. One of the two dared the other to see who could punch each other the fastest, or something similar. The cameraman lent forward to get Johnny but Johnny was clearly faster and stronger and punched the cameraman in the face. Johnny got up smiling with both thumbs up but was told off by Pancho.

"You fucking bust my nose!"
— The cameraman

The cameraman was the only injury in the incident. His nose was bleeding but it was unknown if it were broken as well. 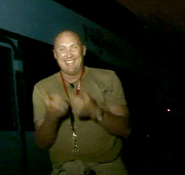 Retrieved from "https://dirty-sanchez.fandom.com/wiki/Fastest_punch?oldid=3555"
Community content is available under CC-BY-SA unless otherwise noted.