This is a whipping stunts from the third series of Dirty Sanchez. It was meant to involve only two of the boys but unfortunately for Dan he was accidentally caught up.

Pritchard was upset with what Dainton had done to him throughout the series so far. Pritchard shown off how powerful the fishing rod is like as a whip in front of the boys.

Dainton bent over prepared for his punishment from Pritchard. Pritchard thwacked Dainton which in turn had hit Dan by accident and broken the rod.

Dainton was in a lot of pain and had a mark on his skin. The rob was broken so the stunt could not be repeated. 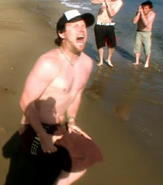 Add a photo to this gallery
Retrieved from "https://dirty-sanchez.fandom.com/wiki/Fishing_rod?oldid=2519"
Community content is available under CC-BY-SA unless otherwise noted.