"This is the deal, we're gonna have a flipper race across the beach and the loser gets a s- (gets hit by Pritchard with a flipper)"
— Dainton

This was a challenge that made its only appearance in Series four of Dirty Sanchez and featured all the Sanchez boys.

The boys had the simple challenge of racing each other on a beach with some flippers on. However, whoever loses gets hit over the head with a flipper by the others.

The race got under way with Dan and Dainton neck and neck, Pritchard was only just behind the two. At one point Dan lost one of his flippers which gave him a slight advantage but Dainton was already at the finishing line. Dan came a close second with Pritchard in third. Pancho was still jumping his way to the finishing line, making him the obvious loser.

Pancho lost the race due to his stubby legs, in fact after Pritchard crossed the line in took Pancho around seven more seconds to finish. Pancho, however, didn't like the fact that he lost and didn't want to suffer the punishment. The boys then targeted Pritchard seeing as he came third. Dainton whacked Pritchard over the head which almost knocked him out. After a while all the boys managed to get Pancho when he was busy being distracted. 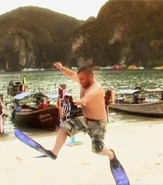 Retrieved from "https://dirty-sanchez.fandom.com/wiki/Flipper_race?oldid=2784"
Community content is available under CC-BY-SA unless otherwise noted.