This was a stunt that involved Pritchard on a sledge and him being pushed in a river.It is Pritchard's least favourite stunt.

Pritchard started his stunt by stripping down to just his shorts and shoes. He then got on a sledge and had Dainton push him down the mountain into the frozen river below. Pritchard hit the river immediately and as soon as he went in he ran back out.

Pritchard stated that this was the worst stunt he had done and the only stunt he didn't want to repeat. Pritchard's body suffered as the muscles and his lungs had practically frozen making it hard for him to breath. 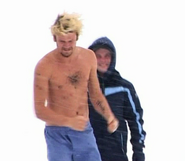 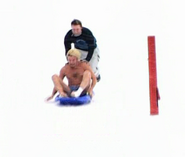 Add a photo to this gallery
Retrieved from "https://dirty-sanchez.fandom.com/wiki/Frozen_river?oldid=2734"
Community content is available under CC-BY-SA unless otherwise noted.