"What the boys don't know right is that I've been officially ordained as a fucking proper vicar."
— Dan telling dainton

This is a prank performed by Dan Joyce against both Pritchard and Pancho. Johnny B assisted with the prank while Dainton, though he knew everything about it once he was told by Dan, didn't have a role in the prank itself. Its only appearance was in the third series of Dirty Sanchez.

Dan Joyce came up with an idea to get Pritchard and Pancho married, and not as a joke. Dan found out that all one has to do to officially get two people married is to go on the internet and ordain yourself as a vicar, which Dan did. Immediately he told Johnny B. Johnny B tricked both Pancho and Pritchard into thinking that the gay wedding was just a gag for show, which they brought.

The day of the wedding, Dan told Dainton about the prank. Johnny B helped the two buy a dress for Pancho and a suit for Pritchard. By now everything was set. They had an audience ready and Dan as the vicar. Dainton asked Pritchard if he was ready and if there were any regrets but unknown to Pritchard the time for regretting anything had long since passed. The wedding ceremony started off actually quite lovely; Pritchard looked smart and Pancho, short and fat as he was looked quite nice in his dress, as they walked down the aisle Dainton can be seen trying not to laugh, in fact throughout the whole service he was trying not to laugh. Dan proceeded to begin the vows, when asked if he would take Pancho as his bride Pritchard said he would, though began laughing at how ridiculous this whole "gag" was, saying it was fucking weird. When asked if he would take Pritchard as his husband Pancho said he would, though he fucked around a little bit during the vows by alternating between a soft feminine voice and a gruff, sort of drunk, manly voice, making Pritchard laugh. And so by the powers invested in Dan both Pritchard and Pancho became man and wife, though they had no idea at that time it wasn't a joke but for real.

"I'm fucking not married to a man!"
— Pritchard upon finding out

After the wedding the reception party turned a bit chaotic when the whole room decided to have a food fight, during which Pancho's dress got covered in food, while trying to make a joke about how his dress got ruined but that it was worth it Pancho gets hit in the face by some thrown food, the thrower is unknown.

Pancho and Pritchard had no idea they were actually a married couple, indeed It wasn't until two days later after the live show that Dan decided to tell Pritchard and Pancho he had actually become a vicar and had actually got them married. First they reacted like it was some sort of joke but after Dan shown them physical proof Pritchard reacted with anger while Pancho was shocked, considering how both of them were in actual relationships back home in Wales. Pritchard yelled at Dainton, Johnny and Dan, even though Dainton had no part in the prank, strangely Pancho started treating the whole thing like a big joke, causing Pritchard to tell him off before they both turned against each other. Dan joked that the two can celebrate their honeymoon in Greece. Later the two were forced to have a divorce. 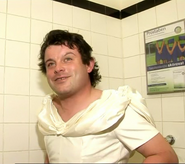 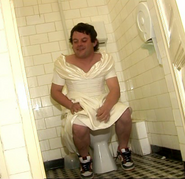 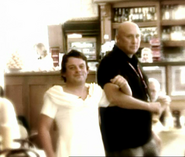 Add a photo to this gallery
Retrieved from "https://dirty-sanchez.fandom.com/wiki/Gay_wedding?oldid=3809"
Community content is available under CC-BY-SA unless otherwise noted.