"Lads I was speaking to some cowboys earlier and they said that there's this old game they use to play in the old wild west. What they use to do is um line up a load of fake glass bottles but put one real one in there"
— Dan Joyce explains

This was a stunt that appeared in the second series of Dirty Sanchez and only featured three of the four Sanchez boys.

Dan Joyce, though having no real part in this, explained the stunt to the others. All the boys were blind folded so they were unable to tell what was real and what wasn't.

Pancho went first and smashed the glass over his head, luckily it was fake. Dainton went next and one again it was fake. This only meant that Pritchard had the real bottle. Pritchard hit himself with the bottle and obviously it didn't smash.

Dainton and Pancho won the challenge whereas Pritchard didn't. Pritchard had a sore head from the real bottle. 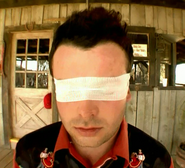 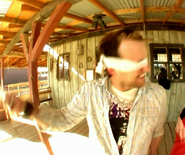 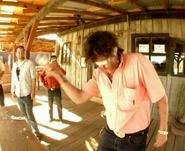 Add a photo to this gallery
Retrieved from "https://dirty-sanchez.fandom.com/wiki/Glass_bottle?oldid=2488"
Community content is available under CC-BY-SA unless otherwise noted.