This is the forth episode in the second series of Dirty Sanchez. This time the boys are training with Royal Commandos in what is their toughest job.

The corporeal tells that the Sanchez boy's main objective is to train on the Commando course before doing the ever so difficult Endurance test.

Lee Dainton, Pancho, Dan Joyce and Matthew Pritchard all for the first time in Sanchez history act sensible on the work site and instantly see the huge difficultly of training on the commando course. The Sanchez boys see themselves as unfit for training yet all agree that they have to put a lot of effort in the training even if they are sick along the way.

Training in the outdoors Edit

The boys set off having being told what to do. They are throw in to a short course which they have to repeat in in order to complete, they are never allowed to keep still and must always be moving in some fashion. Dan describes it as "murder" The corporeal however says that the training for the marines is an eye opener as many think it is easy to do. One of the main features of training is the fact that they are all being sick while training, Pritchard dares normal people to try and do the course without being sick.

The boys only do stunts outside of the marines. Pancho has no trust with the other, due to the things that have happened to him. Pancho trusts Dainton the least. Dainton believes that no one trusts him and that the show runs on the disloyalty.

With only a few days left before the endurance test, the boys, for once, have to rely on each other in order to succeed. Obviously no one wants to be with Pancho because he is useless. The Sanchez boys have trouble working in teams due to trust issues but according to the corporeal says that it is very important. Dainton says "it's all man for himself"

"Enjoy that?! Good wasn't it? Experience I'll see you on the Endurance course tomorrow fellers"
— The corporeal after Follow the leader

The time had come it was quite clear that the Sanchez boy end was quite near. The final hazard awaited the boys, where all their skills were put to the test. It was team based where Pritchard and Pancho vs Dainton and Dan. They went ahead to the "hardest assault course in the country" Through trial and turmoil the boys managed to do it, well only two did so, Dan and Dainton won the challenge. At the end the boys and the corporeal went off to a pub where Dainton met a naked woman, it is shown through a slide show. 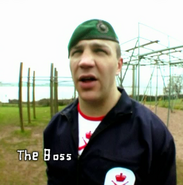 Retrieved from "https://dirty-sanchez.fandom.com/wiki/Going_Commando?oldid=3078"
Community content is available under CC-BY-SA unless otherwise noted.