"Now Greece, they had Democracy, Olympics and Feta cheese."
— Johnny B introduction

This is the forth episode to the third series of Dirty Sanchez. This time the boys are alone trying to get a live show while also debating about their version of "Democracy"

"Sunday the tenth, five thirty in the mornin'. Very early, just getting off the bus, just at Prague airport, flying to Greece. Wel.. they are... I'm not"
— Johnny B

As planned by Pancho in the previous episode, the boys had gone off to Greece to carry on the tour with out Johnny B. Johnny is in disbelief and thinks that the boys would not last long without him.

The boys arrive successfully to Greece. Dainton had already planned out the route. They would get a taxi who would take them to a fishing harbour where they then have a fun time on a boat, deciding where to have a live venue comes later. The boats sail around the place and they soon discover how democratic they all really are.

Pancho believes that democracy is about freedom of speech, which the others ignore. Pancho also says that Sanchez democracy is fifty fifty Dainton believes that the boys are the complete opposite of democracy, he also considers himself a dictator. Meanwhile Dan Joyce ponders on about how different stunts different Sanchez, each role goes to the whole Sanchez system however he believes that none of them are treated equally. Pritchard states that if one states a stunt then they have to do it.

Dainton and Pritchard's rivalry is slowly getting worse. Dainton often attacks Pritchard to a breaking point. It's to a point it isn't funny anymore.

The boys find trouble getting a live show up and running. They try public advertisements and radio calls.

Pritchard sadly falls into a trap of partying to the extreme. Pritchard ends up intoxicating and hurting himself in these mass parties. Dainton loses control over the boys and begs for Johnny B to come back and sort them out.

After gaining some audience members through adverts and radios, the boys also find a place to perform. Pritchard thought it was their most messed up show, thinking the people will never forget the show. Meanwhile Dainton gets hold of Johnny B so he can balance out the chaos. 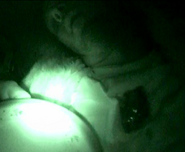 Add a photo to this gallery
Retrieved from "https://dirty-sanchez.fandom.com/wiki/Greece?oldid=3062"
Community content is available under CC-BY-SA unless otherwise noted.