"The final sin we had to do before we go home was Greed and it was in the Dominican. Voodoo, guns and gambling."
— Pancho

This is the seventh episode of the fourth series of Dirty Sanchez. This episode is set in the Dominican Republic where this time the boys are giving what they've got just to finish the movie.

"We arrived at the Dominican Republic and none of us knew where it was. I guess it's the same that Captain Cook felt when he was tracking along, this was probably the first place he came to"
— Dan Joyce

The boys were excited, they were finally done with the movie and this was their final destination. The problem being was that the boys didn't know what the Dominican Republic was going to be like and so it came to a surprise for them when they arrived. Pritchard encountered another problem in which he didn't know what stunts the boys could do that could relate to Greed. They decided to got all the way which in turn turned their experience in the Dominican Republic to be the best time they had. The first group of stunts reflected the theme of pirates and was Dainton's idea.

In the Republic Edit

After being on a ship for at least a day they embarked on their ventures in the Dominican Republic. Here they performed stunts and got to know what the country was like. The boys were then given a task of advertising their live show.

The boys were ready to finish the movie and so they decided to show off their favourite stunts as a live show. The audience consisted of drunk Americans which enjoyed every moment of the live show.

"Finished the live show I was like yes! Finally, can we have our lives back. "No you can't! There's one more thing""
— Dainton quoting Jim

Jim and the producers decided to torture the Sanchez boys some more. After the live show he forced the boys to go to a voodoo ritual and enter a trance. The voodoo ceremony was meant to be how the boys go back to Hell. This moment was the boy's least favourite moment in the entire filming session, luckily it was indeed the end.

"After 6 weeks around the world Jim finally said "That's a wrap.""
— Pritchard 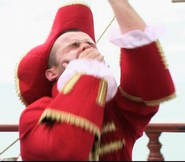 Retrieved from "https://dirty-sanchez.fandom.com/wiki/Greed?oldid=2940"
Community content is available under CC-BY-SA unless otherwise noted.