"Look at her hands."
— Pritchard

"Look at HIS hands."
— Dainton, at first not being fooled at all.

Guess the ladyboy was the name of a game Pritchard had come up with in Thailand for Lust. The aim of the game was to guess which one out of the girls they would be kissing is actually a ladyboy. However Pritchard had rigged it as he actually knew all the women in this game were ladyboys, this being him getting at Dainton in the never ending Pritchard vs Dainton rivalry.

Each of the Dirty Sanchez crew had their own ladyboy to try and guess if they had a cock or not (Pritchard, as mentioned before had rigged it as he knew the truth). While Pancho and Dan couldn't tell, and Pritchard pretending not to know, Dainton was the only one who, at first, had worked out all of them were not proper women, as they each danced one by one Dainton would correctly guess each was a man, commenting that one of them had a 'Desperate Dan' chin.

The next part of the game was having a kiss with the ladies, Pritchard went first with no problem, Dan seemed to get way too excited as he kissed his lady, dancing with her and rubbing asses as he looks at the camera with a sort of strange glee in his eyes and a weird expression on his face, Pancho started to feel sick and actually gagged at one point, nearly being sick as a result (though it's not known if he meant to do this or why he started to gag, Dainton and Pritchard joked on the commentary he must have had a homosexual experience at some point in his life, and since Pancho, along with Dan, didn't turn up for the commentary he had no way to defend himself), Dan and Pancho had pretty much worked out that they were all ladyboys. However filming was abruptly stopped when Dainton refused to kiss his ladyboy, shouting at Jim that he wasn't going to kiss a man. The smart Dainton that was shown up until this point shown vanished when Jim tricked him into thinking that his ladyboy with the stars and stripes bra was an actual woman and he agreed to kiss her. Unexpectedly not only did Dainton slip a tongue in at one point but he actually got semi hard, something that tickled Pritchard a treat.

One by one the boys found out if they had a woman or a ladyboy, all of them having ladyboys. When Dainton discovered his woman wasn't actually a woman he lost the plot, especially when Pritchard revealed he knew all the women were men, before the reveal as Dainton was in shock Pritchard would gleefully express on camera the fact that not only did Dainton use his tongue but he got semi hard from a ladyboy as well. Dainton, distraught would later worry about his girlfriend, or worse his kids, seeing him kissing a ladyboy. 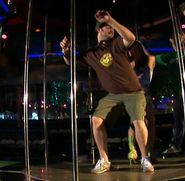 Add a photo to this gallery
Retrieved from "https://dirty-sanchez.fandom.com/wiki/Guess_the_Ladyboy?oldid=3582"
Community content is available under CC-BY-SA unless otherwise noted.