"It's because I'm the short one"
— Pancho

This was a stunt that involved Pancho being strapped onto a door while Pritchard chucks hot water at Pancho, who is defenseless.

An alternative for the stocks[edit | edit source]

First of all all the Sanchez boys used some gaffer tape to hold Pancho up on a door. They tightened him up and decided to let him hang there while they throw things at him. Pritchard started by chucking a bucket of hot water at Pancho. Pritchard did it again which by this point loosened the tape releasing Pancho after a while. 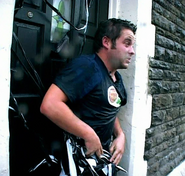 Add a photo to this gallery
Retrieved from "https://dirty-sanchez.fandom.com/wiki/Hang_in_there?oldid=2421"
Community content is available under CC-BY-SA unless otherwise noted.