This is the fifth episode of the third series of Dirty Sanchez. This time the boys are in Italy where Dainton and Pritchard's rivalry has hit the boiling point and the other crew members are slowly losing their minds.

In Greece, before the boys get in to Italy, Dainton steals Pritchard's passport again where Dainton uses a permanent marker to vandalize it. Pritchard becomes reasonably angry and almost has no chance of getting into Italy until he managed to rub out the vandalism with a coin. Pritchard believes it's getting beyond a joke.

"We've been on the road for five weeks now and it's all gone horribly wrong..."
— Pancho in a confession box

Dainton believes it is very possible to drive some one mad and has noticed that almost everyone, camera crew, Johnny B and producers have all been hit by a "crazy bug". Dainton also states that they need to regain their sanity or else the tour is over. Pritchard is shocked that he is still friends with Dainton after the torment he has to endure and promises that he will get Dainton some time. Pancho goes to a confession box where he confesses his sins. He reveals the boys are getting bored easily, only pornos been able to save them but it seems that isn't enough. Pancho wants to escape before the madness gets him too.

"To be honest, I think Dainton has driven Pritchard insane"
— Pancho

As the tour has gone on, Pritchard and Dainton have had multiple battles, mostly won by Dainton. Pritchard vows to get Dainton some time on the coaches. Dainton's reasoning for the war on Pritchard is because he gets bored easily and Pritchard is easy to "fuck with"

On the coaches, Pritchard had a plan to get Dainton. While the boys were performing stunts, Pritchard pulled out some pepper spray and attacked Dainton. In the fight, the bus driver was also caught up which resulted in the entire crew being forced to walk.

War between the two escalated when Dainton planned revenge against Pritchard in the most humiliating of ways. The night before the live show, Dainton decided to get Pritchard while intoxicated. Dainton shaves Pritchard's long hair off in revenge for the pepper spray incident. When Pritchard wakes up the next day he reacts in a not so happy form...

Thanks to Dainton humiliating him by shaving his head Pritchard did not appear in the show. Dan Joyce shaved most his hair in support for Pritchard, and in the next episode he was just as bald as Pritchard and Pancho, who had also shaved off what little hair he had left to also support Pritchard. This was the only live show to have just three out of the four Sanchez crew. 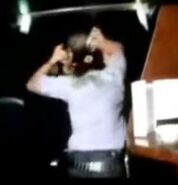 Retrieved from "https://dirty-sanchez.fandom.com/wiki/Italy?oldid=3626"
Community content is available under CC-BY-SA unless otherwise noted.