"I haven't had a black eye since I was young and I really want a black eye, hopefully this'll work!"
— Pritchard

This was a stunt from the second series of Dirty Sanchez and involves only one of the Sanchez members.

A day later he got his wish, a black eye. 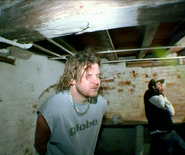 Pritchard and the black eye
Add a photo to this gallery
Retrieved from "https://dirty-sanchez.fandom.com/wiki/Jackpot?oldid=3138"
Community content is available under CC-BY-SA unless otherwise noted.