However there was a catch, each of the boy's costumes would be chosen not by themselves but by each other for the person of their choice. As a result each of the boys had to wear the most ridiculous costumes that the other members of the group had bought for them. Dainton came out wearing a fishnet costume with a mankini that didn't hide his cock or bollocks at all, Dainton revealing in the commentary that his costume was bought by Pritchard. Dan came out as The Gimp once again but this time he wore a yellow power rangers costume with a wig, leather mouth mask and a strap on with a plastic penis attached. Pritchard soon came out wearing a union jack mini-dress, a wig and a hat that made him look like a member of the Spice girls, and his was presumably bought by Dainton. Finally there was Pancho, who came around the corner on his hands and knees dressed up as a mouse. Each of the boys were laughing at how funny they all looked in their costumes and were good sports about the whole thing.

As soon as all had put on their costumes they were ready to fight and reentered the warehouse where the wrestlers were. In series 4 Dainton revealed that as soon as they stepped inside with their costumes on they quickly lost their pride.The first of the boys to fight was Dainton and immediately was thrown to the ground covered with glass, he is then hit with a glass pole twice before being held in a choke grip and kicked. After losing Dainton looked like he was in a lot of pain

Pritchard was up next and he was hit with glass and then taken down to the floor. He had a glass pole shoved into his forehead before being bitten and was also kicked in the back as well. Regarding his match Pritchard said out of all the things that hurt it was the kick in the back that had be the most painful, and in the commentary he said the glass shoving was brutal as well.

Joyce went up next. He was picked up and dropped onto two glass poles and was kicked repeatedly in the back. Much to the amusement of the other three one of the wrestlers had pinned him down and started sucking the fake penis on Dan's strap on, afterwards he then bent and twisted it before eating his wig.

Poor Pancho was last and tries fighting back with his tail before he is chased around the ring by the wrestlers, but soon they get him by hitting him with a chair. They use the same chair to choke Pancho and they grab hold of his nose making pig noises at the same time, Pancho looking like he was about to pass out any second. 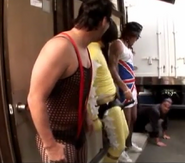 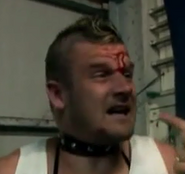 Retrieved from "https://dirty-sanchez.fandom.com/wiki/Japanese_Wrestling?oldid=3469"
Community content is available under CC-BY-SA unless otherwise noted.