"Look at him! He'd be hopeless in a fight"
— Dainton commenting about Pritchard

This was a stunt from the second series of Dirty Sanchez involving both Dainton and Pritchard fighting in knight armour.

It is unknown why the boys were in this situation in the first place. Presumably it was to entertain a group of people in a pub somewhere. Firstly it only involved both Pritchard and Dainton fighting a sword fight while wearing a suit of armour. Dainton won the fight but continued to beat Pritchard up with his fists.

After ward the boys dropped their suits of armour and started tapping each other on the arm with a sword. Each tap got harder and harder until Pritchard gave up and allowed Dainton to win.

Later inside a pub the boys fought with hammers hitting each other in the head as that was the only part of their bodies with any protective armour. Eventually the two dragged one another to the ground and starts hitting each other, however Pritchard's helmet fell off while Dainton was hitting him with a hammer. The fight had to stop. The last act involved Pritchard standing still while Dainton hits him across the head as hard as he could with a hammer.

Bruises were the worst part from the stunt however Pritchard also suffered a lot of pain after being hit by a hammer multiple times. 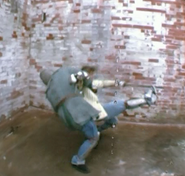 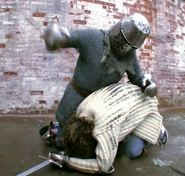 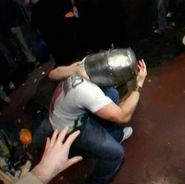 Add a photo to this gallery
Retrieved from "https://dirty-sanchez.fandom.com/wiki/Knights?oldid=2470"
Community content is available under CC-BY-SA unless otherwise noted.