This was a stunt performed by Pritchard and Dainton. It features Dainton and Pritchard being shocked by muscle stimulaters on the arse in order to get that perfect Kylie Minogue ass while also tormenting each other.

"It is a heavy duty (muscle) satellite treatment this one. We don't use it unless it's necessary"
— A Doctor

Dainton was originally the only one who was going to do the stunt but Pritchard wanted to prove himself better so they both ended up doing it. Dainton had the pads placed around his cheek muscles. At first the doctors started from a low voltage which got Dainton screaming straight away, his ass cheeks twitching in response to the muscle stimulators. The doctors turned the voltage higher and it proved very painful for Dainton so much so he begged for the pads to be taken off, Pritchard laughing the whole time, until he realised it would soon be his turn, and trying to back out after seeing how much pain Dainton was in.

Dainton decided to get his revenge on Pritchard (even though he didn't do anything but laugh) for making him go through with the shocks by being the one to turn the dial up and shock him. Unlike Dainton however Pritchard's shocks were much more intense and caused him to be in immense pain, in fact he felt so much pain that he was biting the bed, all while his ass was twitching like mad and Dainton, as well as the doctors laughing at him. It turned out there was a reason for this, the doctors discovered Dainton had accidentally turned the dial all the way to maximum right from the beginning. At the end of the shocks Dainton slapped Pritchard on the head, causing him more pain.

Both boys suffered a lot of pain but it was only temporary and didn't last long, and they managed to get the Kylie Minogue asses they came for. 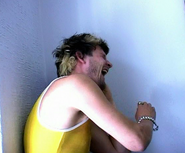 Retrieved from "https://dirty-sanchez.fandom.com/wiki/Kylie_Minogue?oldid=3810"
Community content is available under CC-BY-SA unless otherwise noted.