"Ping Pong lady said "me too chubby you need to lose weight. Too chubby, too chubby""
— Pancho interprets the Ping pong stripper in an Italian accent

This was a stunt featured in the movie and only features Pancho getting the fat sucked out of him.

Pancho was told by a stripper, who popped ping pong balls out of her vagina and when impersonated by Pancho became Italian, to lose weight because he was fat. Pancho was very hungover when he was told to go to a back alley doctor in a ghetto area because the doctor there was apparently "the best". As revealed in the commentary for the film the doctor actually examined not just Pancho but the other boys as well, Dan and Pritchard had the all clear, however the doctor thought Dainton had a bit of fat on him, however Pancho, being short and fat obviously had more than Dainton and was the one to have a liposuction, had Pancho not been fat enough then Dainton would most likely have been the one to have done this stunt. After repeating what the ping pong lady had told him (while also, as mentioned above, confusing a Thai accent with Italian) Pancho goes inside to meet the doctor. After introducing himself like a caveman and thrusting in front of the doctor Pancho was shown by the doctor, after he examined how fat Pancho was, how the liposuction works and Pancho was shown an image of what happens to the fat after being sucked out and was told to expect "some pain".

Pancho was soon ready for his operation and so were the others who were ready to stand there and laugh at his misery. The first part of the surgery involved Pancho being cut open slightly. However Pancho's pain soon began when the doctor started using his large needle. For almost half an hour Pancho had a large needle put inside and pulled out of him repeatedly. Curious as to why they were continuing even though Pancho was verbally saying ow to show how painful the whole thing was the boys asked the doctor why they carried on despite Pancho being in pain. It turned out that apparently ow in Thai actually translated as "more", so they kept going, and even after hearing this information Pancho was still saying ow, with Dainton calling him an idiot for it. After a long time the needle was been pulled out and everyone thought and told Pancho that it was over, however, and unfortunately for Pancho this was just the beginning, as it turned out the liposuction hadn't even started, and soon a large tube was inserted into Pancho. Throughout the whole thing the boys, Pritchard and Dainton specifically mocked Pancho, with Dainton pretending that he was a pregnant woman giving birth. Dan was the only one who showed actual concern for Pancho and let Pancho hold his hands, however as seen on Dan's face Pancho was gripping his hands so tight that Dan felt his nails digging in.The next part of the surgery involved the fat being sucked out of Pancho. For what seemed like forever Pancho's fat went inside a jar along with blood that got caught up in the suction and soon the surgery stopped, after all Pancho was not obese, just fat.

"Right now we got it, we just need to find a way of getting rid of it"
— Dan Joyce

It was the most painful stunt Pancho had ever committed and one he regretted. The surgeon allowed Pancho to keep his fat as a "trophy", and Dan suggested they find some way of getting rid of it. The fat was later used in the last round of Bangkok Roulette that Pancho had named Unfortunate Wank where Dan lost the last round, resulting in him have to eat it. Pancho was unable to do any impact stunts afterwards due to safety, and to give him some rest when the crew went to Phi Phi the Crab racing contest was rigged so Pancho would win and relax in a five star hotel with Dainton.

However there was one minor problem: as revealed by Dainton and Pritchard on the commentary for the film Pancho only had one side of his body liposuctioned, and would need the other side done as well. Naturally after going through so much pain he refused to have it done again, had he not done it again then for the whole of the film as Dainton explained he would have had one thin hip and one fat hip, giving him an odd shape (or as Dainton himself says would have made Pancho look like a cunt), with Pancho believing that the fat would grow back, unaware that a liposuction was permanent. However once he was told by the crew that he would have to actually pay for the other side to be done back in the UK Pancho quickly changed his mind and went ahead with a second liposuction. 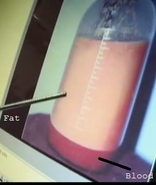 The doctor shows an image of where the fat goes 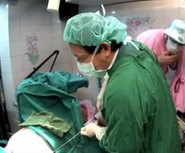 Fat being sucked away