This was a prank that involved Dainton pranking Pritchard as a part of the Pritchard vs Dainton rivalry. It was also featured as a Deleted scene in the DVD for series one involving Dainton's mother.

Dainton had brought a box of locust and had waited for an opportunity to put them on Pritchard's head while he was asleep. He did so and waited for a reaction.

"What the fuck are they?!"
— Pritchard after waking up

Due to Pritchard's fear of bugs, he jumped up and screamed. Dainton chases Pritchard and chucks some more on him. This only resulted in Pritchard getting Dainton back by hitting him with a cigarette.

At a Christmas meal Dainton had hold of some Locust where he opened a box containing them onto his mother. His mother scream and ran out of the room while Dainton chucked more Locust on his mother, some of which got stuck in her hair.

Dainton assisted his mother by getting all the Locust out of her hair and cleaning up the place only to prank her again... 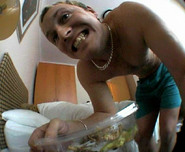 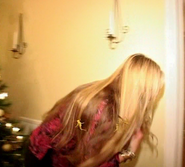 Add a photo to this gallery
Retrieved from "https://dirty-sanchez.fandom.com/wiki/Locust?oldid=2409"
Community content is available under CC-BY-SA unless otherwise noted.