This is the third episode of the fourth series of Dirty Sanchez. This episode is about how Pritchard wanted to get Dainton by using Ladyboys while the Sanchez boys wanted to make Pancho lose weight in the most painful way possible with Dan Joyce having to stomach the consequences.

The boys were glad to get out of Russia. Dainton chose Thailand to be the place for Lust due to the infamous ladyboys and the stripclubs around the place. Pritchard was excited to piss off Dainton.

"I'd describe Bangkok like this; check for balls"
— Dainton

Pritchard wanted to get Dainton in Thailand and the sin lust was a perfect opportunity. He entered a strip club where he met the ladyboys. Pritchard hatched a plan with the help of the Sanchez crew to prank Dainton into kissing a ladyboy. Around this time the boys found out about Pancho's slight homophobia, which Dan believes is because he may have had a gay experience in the past.

The surgery Pancho had to go through was planned in the last minute. The surgery was something that originally going to be a half job in Thailand and the other half in Wales. The reason why this didn't happen was due to it being too expensive. Dan also dreaded the Bankok roulette challenge and was scarred by the horrors he had to endure. 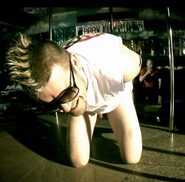 Retrieved from "https://dirty-sanchez.fandom.com/wiki/Lust?oldid=2565"
Community content is available under CC-BY-SA unless otherwise noted.