Pritchard wanted to do a stunt involving him standing on a ladder while Dainton drives into the ladder at high speed. Dainton was very nervous constantly talking to himself and shaking in fear of killing his friend. Pritchard gives Dainton the sign to go and Dainton goes full speed ahead. Dainton hits Pritchard who goes over the car and he hits his neck on the ground.

Pritchard survived but had a bad head after hitting it on the ground. At the end all the Sanchez boys had a sit down and watched the footage back to back, they had a good laugh.

In Series two, Pritchard and Dainton repeated the stunt but this time there was no ladder. Dainton drove into Pritchard who jumped into the front windscreen and broke it. Both survived but it did hurt Pritchard's back. 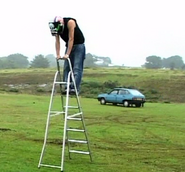 Dainton in the car 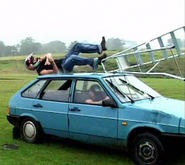 Add a photo to this gallery
Retrieved from "https://dirty-sanchez.fandom.com/wiki/Man_vs_Car?oldid=2476"
Community content is available under CC-BY-SA unless otherwise noted.