"Pritch y'know when you made that mask. Did you think the fact that you're gonna have to take it off as well"
— Dan Joyce

This was a stunt that appeared in the forth episode of series one. It involved Dainton and Joyce ripping off tape around Pritchard's head.

"It would be extremely painful" Edit

"Not a fucking joke this is really hurting"
— Pritchard

Pritchard for reasons unknown had used gaffer tape to make a mask for himself. However Pritchard forgot to remember that he would have to take it off.

Dainton began ripping the tape off and soon so did Joyce. After the two had ripped off clumps of Pritchard's hair, Pritchard wanted to do it himself so he could do less damage.

"Along with Naked Paintball, I'm never doing that again"
— Pritchard

Pritchard lost bits of his hair and had a few small bald patches. Pritchard had suffered pain afterwards due to the hair being pulled out. Pritchard regretted the stunt. 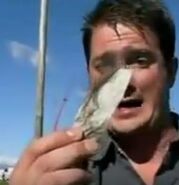 Add a photo to this gallery
Retrieved from "https://dirty-sanchez.fandom.com/wiki/Mask?oldid=2431"
Community content is available under CC-BY-SA unless otherwise noted.