This is the second episode of the spinoff series Sanchez Get High. This episode follows Dainton and Pritchard trying to find Mexico's ancient highs based all around gods.

The day after the boys were proud of the highs they just had the day before and now they decided to have fun for the rest of the week, doing things that other Mexican men would do to prove they're hard.

They then discovered some remedies that could make them invulnerable to pain, of course they decide to test this out.

On the road once more looking for another high that the boys could use. They struggled to find another one until Pritchard read about a herbal drug that they could use, hilarity soon ensues. 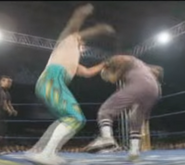 Retrieved from "https://dirty-sanchez.fandom.com/wiki/Mexico?oldid=2897"
Community content is available under CC-BY-SA unless otherwise noted.