"Get ready to fucking run!"
— Dainton's warning to the cameraman

This was a Pancho wake up prank from the third series of Dirty Sanchez and was featured as a post credit scene.

Get ready to run[edit | edit source]

Dainton had stumbled upon Pancho's body. Pancho had passed out from a day of partying and was laying flat down in front of a hotel they were staying in. Dainton with a mousetrap decided it would be great to wake Pancho up by trapping his nose. Dainton slowly snapped the mousetrap on Pancho's nose and managed to wake him up.

To everyone's surprise Pancho didn't wake up straight away. Sadly the episode ended so it was unknown how Pancho reacted. 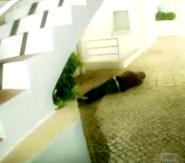 Add a photo to this gallery
Retrieved from "https://dirty-sanchez.fandom.com/wiki/Mouse_trap?oldid=2501"
Community content is available under CC-BY-SA unless otherwise noted.