"Cause this is Area fifty two and we filming the Sanchez movie, so I got this idea right? Where we proper up the anti. What we gotta do right is bollock right down this field , we got a massive football pitch, with a run up and just smash the car straight through the caravan"
— Dainton's plan

This was a staged Dirty Sanchez stunt that was used to begin the film and features all the Sanchez boys.

All my friends are dead Edit

Before the stunt Dainton explains the entire plan as a whole. He also explains to Pancho that he has to be inside the caravan in the corner so he doesn't get killed, Pancho, for whatever reason, as revealed by himself and still to Dan's bewilderment and amusement in Series 4, believes the stunt to be real and refuses to get in the caravan, coming up with reasons such as 'short man short life!' and saying even if Dainton had a "flux capacitor in that fucking car" that he wasn't going in the caravan. A minute later he is shown passed out on the floor of the caravan sleeping (implying the crew managed to convince him that the stunt wasn't real and would be part of the plot of the film. Why he fell asleep though is anyone's guess), Dainton takes this chance to drive the car through it.

Dainton drives the car with Joyce and Pritchard in the back. Pritchard gets a bottle full of hot sauce and, with help from Dan removing Dainton's sunglasses, rubs it in Dainton's eyes as he is driving. Dainton hits the caravan which causes an explosion and kills all four of them.

All the Sanchez boys end up going to Hell, Dainton and Pritchard arguing as usual as Pritchard defended himself for getting them all killed as getting back at Dainton. During this bickering Satan reveals himself to the boys and gives them the chance to be alive again by performing the Seven Deadly Sins. As he leaves Satan farts, making the boys laugh and starting the film off proper as they start off with Sloth. While having his make up done for the two scenes set in Hell Pancho had lost his eyebrows and he wouldn't find out until Pritchard revealed it during filming, resulting in him leaving the set in anger and with no eyebrows. 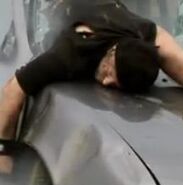 Retrieved from "https://dirty-sanchez.fandom.com/wiki/Movie_introduction?oldid=3654"
Community content is available under CC-BY-SA unless otherwise noted.