"It says No More Tears in this stuff. Let's test this out and whether you'll cry."
— Dan Joyce before testing it on Pritchard.

This was a stunt involving a bottle of "No More Tears" and four idiots with their eyes wide open.

The stunt begins with Pritchard lying down with his head in a sink with Dan Joyce holding a bottle of No More Tears. Pritchard opens his eyes wide while Joyce squeezes the bottle which squirts the product into Pritards eyes resulting in him jumping up in pain.

"That's some fucking tears!"
— Pritchard unable to open his eyes

All the Sanchez's suffered stings to the eyes and proved once and for all that No More Tears was infact a lie. 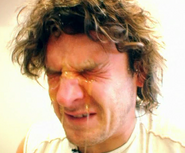 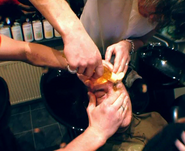 Add a photo to this gallery
Retrieved from "https://dirty-sanchez.fandom.com/wiki/No_more_tears?oldid=2456"
Community content is available under CC-BY-SA unless otherwise noted.