"Did you nick my bingo seat love, I'll give you slap!"
— Pritchard acting as a angry old lady

This was a gag style stunt that was featured in the second series of Dirty Sanchez. It involved three of the Sanchez boys dressed as old women and acting like them too.

Handbags and the gladrags[edit | edit source]

The first part involved Pritchard acting like an angry old lady with another old lady due to stealing a bingo seat. Before the act itself Dainton was explaining how it was going to happen, however Pritchard thought of pranking Dainton by flashing him. The next part was the actual gag. Pritchard accused Dainton of stealing a bingo seat before hitting him with a handbag with quite some force. The handbag broke and it sent Dainton to the floor.

"Get away from my sister!"
— Pancho joins in

Dainton was the brunt of the attacks, being hit both in the head and in the testicles. It hurt a lot. 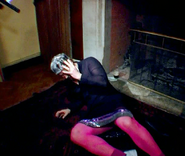 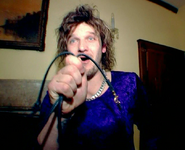 Add a photo to this gallery
Retrieved from "https://dirty-sanchez.fandom.com/wiki/Old_ladies?oldid=2457"
Community content is available under CC-BY-SA unless otherwise noted.